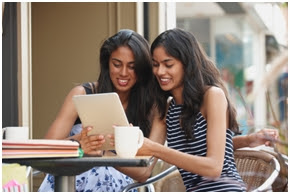 Colombia. The diversity of online scams, marriage for visa, internet fraud and romance scams is significant and is well known in Bogota, Barranquilla, Cartagena and Cali. Many Colombian women are seeking better lives, and trying to escape from the poverty and corruption that are all too common in many parts of the South American nation. While many women never have any intention to marry, and are simply seeking financial support from their online lovers, others are seeking marriage for visas into Canada, the U.S., Australia or the U.K. The Colombian women are seeking out their sugar daddies on major match-making and social networking sites.

Most of the scammers in this region look for love online and in addition to financial gain, señoritas are also looking for the ticket to get into developed countries by marrying the wealthy gringos or an aussie or brit, and of course the Canadians are also at risk. The local economy in Colombia has been slowly improving, but life in the country is still difficult for most women. The country’s reputation was greatly affected by organized crime and narco-trafficking in the past. Colombia has made significant gains against the cocaine production and drug producers, and these days it seems internet scams and romance fraud are almost an equally serious problem for the country.

Young people get jobs in cities like Bogota, but the wages are very low and in many cases no benefits are included. Colombia still has an alarming percentage of youth employed under the table and prostitution is like a cancer, especially in tourist areas like Cartagena, where the seeming majority of the women are for sale here, with tacky modifications such as butt implants, fake breasts and other plastic “enhancements” to attract their mate. For a Colombian woman, love has no meaning if her man has no money, and this mentality has no taken to the internet.

“It is pretty hard to get wealthy in these countries”, said one Colombia private detectives at his Bogota office. “With constant inflation and corruption, the population struggles everyday to make a better life for themselves and for their families. It’s not easy. These conditions have driven a lot of good Colombian women to prostitution.” The internet has brought a so called easy solution for those who want to increase their income. Education, or the lack of, is a serious problem in Colombia, and education and prostitution are inversely correlated. As education levels go up, marriage scams and prostitution go down. So far, there is no solution in site for better education and economic opportunities. In the meantime, romance scams should keep growing.
Colombian girlfriends can have multiple boyfriends abroad. They may request Western Union transfers to pay for school, rent, sick relatives, internet connections, and endless other combinations. One experts says in 80% of the cases surveyed involving online romance with Colombian women and foreign, there was at least one request for money, so men be ready to pay! These scammers can be convincing and gain their victim’s love with their beautiful looks and sweet words. Then when talk about marriage and money starts, it can be hard to turn down.